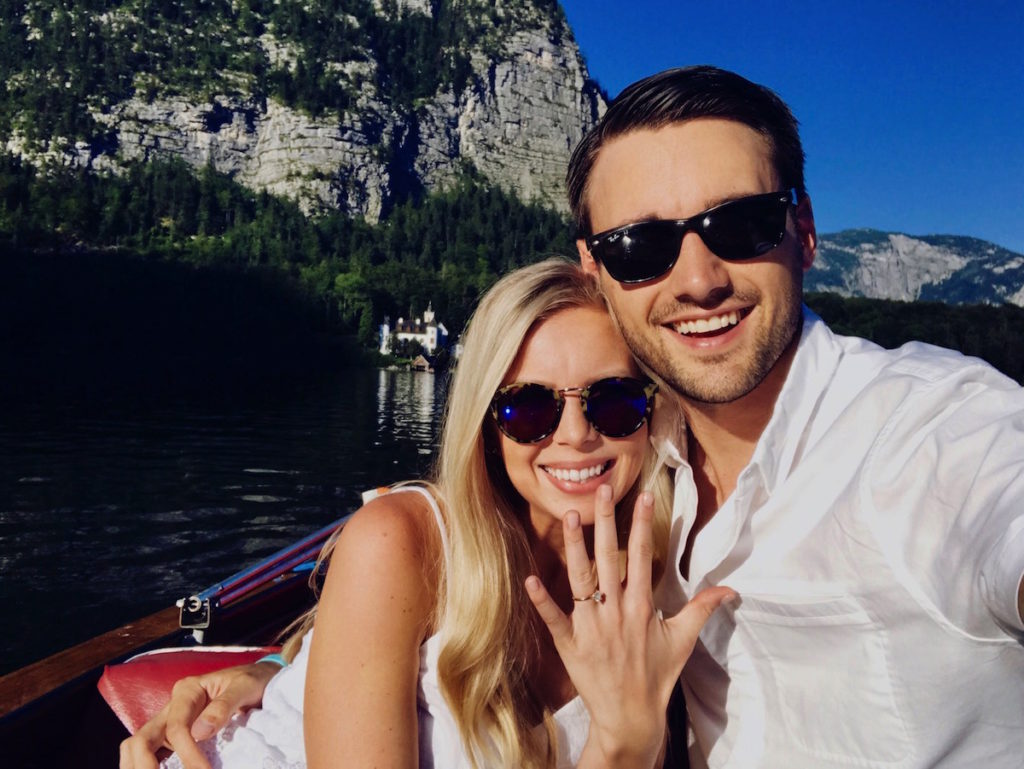 We met Matt and Ellary in the same way we meet most of our favorite clients- through other clients. When we spoke to them first, they were playing with the idea of combining Croatia (Ellary’s choice) and Germany (Matt’s choice). We kicked around ideas on how to combine the two, they sent us their top bucket list picks, and then we got to work.

In every aspect, Matt and Ellary were a joy to work with- responsive, kind, thoughtful and attentive; you know, the kind of clients who make us absolutely love what we do (not that we have anything to complain about).

Everything was going according to plan, and about 2 weeks before their trip, we got an email from Matt with the subject line “Top Secret”. He told us he was planning on proposing to Ellary during the trip! We brainstormed the best stops during the trip for Matt to pop the question, and though many of the stops planned in Croatia would have been perfect, we were all in agreement that it would be best to pop the question earlier on in the trip.

So Austria became the clear winner; it was beautiful, one of their first stops, plus Ellary herself was really looking forward to the hikes there. Matt decided to pass on the overly cheesy pomp and circumstance, and kept it to just a private moment for the two of them, while we did our part and secured dinner reservations with a view.

We’ll leave it there for now, because they do such a wonderful job of telling their proposal story below.

From our end, we’ll just share that we were on absolute pins and needles waiting for news of how the proposal went, compounded by the fact that the weather had other plans, and were so thrilled when Matt sent us a message in the allÃ© travel app sharing the good news.

Let’s just say there were a lot of dancing girl emojis shared between the two of us.

-Polly and Irina of allÃ© travel.

Matt, tell us about your plan to propose to Ellary- at what point did you decide you were going to pop the question on the trip? How did you go about coordinating and keeping it a secret?

I had it in my mind that I might pop the question on our trip for some time, but like most guys, I waited until the last second to finalize any plans. In fact, they had to rush order the ring because I waited until only a week before to buy the ring.

Once I made up my mind to do it on the trip, I emailed Polly and Irina to help plan out the logistics of where the big moment would take place. We settled on doing it on our hike in Austria, as I know Ellary loves to be outside and was really excited about the trip.

My biggest fear was having a TSA agent ask to search my backpack which had the ring stashed away in it, with her standing there in the security line! Thankfully that didn’t happen.

Ellary, did you have any idea or inkling of Matt’s plans?

I would be lying if I would say the thought of getting engaged on this trip wasn’t in the back of my mind. However, I honestly didn’t think it would happen on the trip simply because I didn’t think Matt would be organized or brave enough to bring the ring on the trip (clearly he proved me wrong).

The only time I truly started to get a slight inkling that he may ask me was minutes leading up to it because he was acting very strange. So I was in shock to say the least when he actually pulled out the ring!

We got into Austria””which was gorgeous””on June 26th after spending a long and somewhat stressful drive from Germany and the plan was to pop the question the next day on our hike in the Austrian mountains, however, it was supposed storm so I called a last minute audible.

We went swimming in Lake Hallstatt that afternoon and then ran back to freshen up before heading to take a quick boat ride prior to dinner. The plan was to pop the question while cruising around on the boat in Lake Hallstatt, but I hadn’t planned how I would transport the ring from our room to the boat we were going to rent. I tried putting the ring box in my pocket, but it was pretty obvious!

Despite the warm temperatures, I finally made up an excuse to bring a backpack to carry some jackets for us where I could stash the ring until the right moment and to bring the bottle of wine I picked up at the local grocer.

Once we got into town we rented a small little boat that barely went 5 MPH, but allowed us to tour around Lake Hallstatt. We popped open the bottle of wine in the middle of the lake overlooking Hallstatt and I eventually managed to build up the courage to ask Ellary to marry me, all while awkwardly trying to get onto a knee in a boat that was far too small. Nonetheless, she said yes””the most important part””and the rest is history!

While happily arriving into Austria after a very long drive from Germany, we were ready for a day with no agenda.

We found ourselves enjoying walking around the town of Hallstatt and going for a swim in the lake all before our dinner reservation.

While exploring Hallstatt, we spotted paddle boats and small speed boats cruising throughout the lake and decided it would be fun to try before dinner.

While I was getting ready, I sent Matt out to find a bottle of Rose we could sneak out on the boat. He came back flustered and was oddly insisting on bringing a backpack to carry his jacket even though it was 80 degrees outside.

I quickly brushed off his strange behavior and soon enough we found ourselves in the middle of Hallstatt’s lake in a tiny 2 speed boat drinking warm Rose.

Before I knew it, the boat was rocking back and forth while Matt was attempting to get on one knee (not easy for a guy who is 6′ 5″) and he asked me to marry him! Still to this day I’m in shock that a) he brought the ring with him abroad, b) we didn’t flip the boat, and c) I get to marry my best friend.

What are the stories from your engagement trip that you’re sharing with friends/coworkers/family now that you’re back home?

The most memorable part of our trip””outside of getting engaged””was the all-day boat cruise we took while in Croatia. We toured the blue and green caves and saw some of the prettiest beaches in Croatia as we cruised around in a ten-foot inflatable raft, all while managing not to get sea sick!

Your favorite part of the trip?

We would both agree it’s a toss-up between getting engaged or the milkshakes at Sexy Cow in Split, Croatia.

Where do you have your sights set on for your honeymoon?

Since we were on the move nearly every two days on our most recent trip, we have decided we want to spend our honeymoon in one spot where we can relax on a beach but also can enjoy outdoor activities. Where that is specifically is yet to be determined!

Interested in hiring a helping hand for your travels? Learn more about allÃ© travel.

Get a complimentary printed and bound honeymoon plan (in addition to online version). This is like a guidebook, custom written to you! Makes for a great coffee table book once you’re back from your trip, and a great conversation starter.

Now, let’s fly away to Curacao and Aruba in this beach honeymoon!