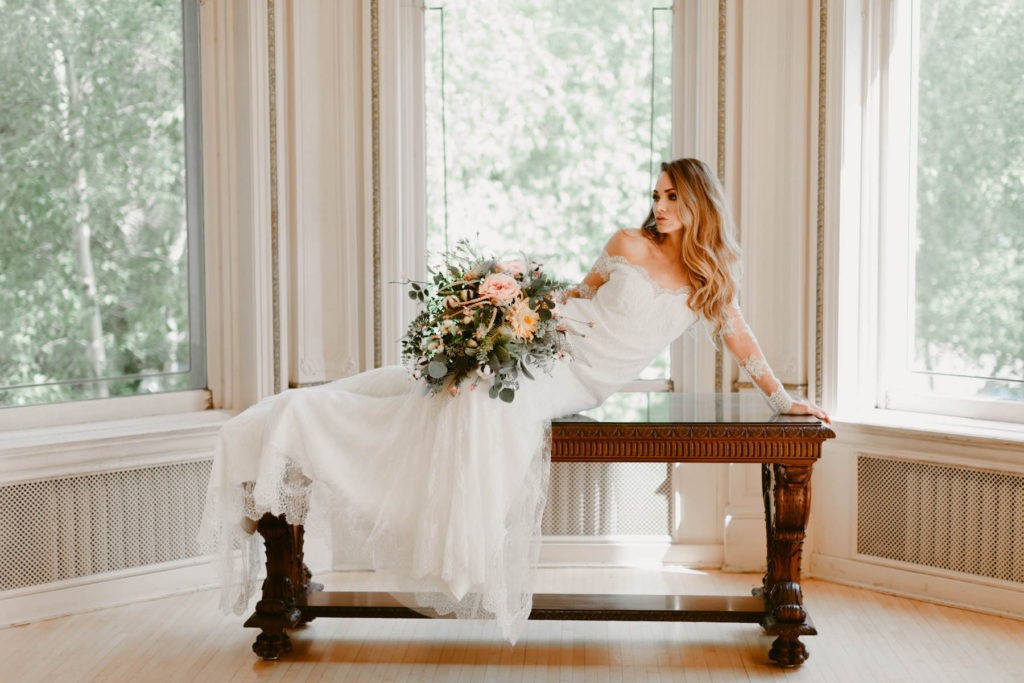 This styled shoot at the Turnblad Mansion is not only brimming with beautifully vintage details, but lavish history, too.

The mansion was built and owned by Swan Turnblad, who emigrated from SmÃ¥land, Sweden at just 8 years old. With his family, Turnblad moved to a Swedish community in Vasa, Minnesota. By 1879, he relocated to Minneapolis and became a publisher forSvenska Amerikanska Posten––the biggest Swedish newspaper in the US. He was the owner within 10 years of working for the paper.

It is rumored that Turnblad’s aggressive management style is what earned the paper its success––as well as the increasing Swedish immigrants who moved to America during that time.An accomplished story of going from “rags to riches.”

He marriedChristina Nilsson in 1883, who was a Swedish immigrant, as well. A year later they had a daughter named Lillian.

To impress the community and show off his wealth, he started making plans for the Turnblad Mansion in the early 20th century. His and Christina’s numerous trips to Europe inspired the mansion’s design and architecture. It took 18 craftsmen to craft all the cabinet and woodworking, while the highly detailed woodcarvings were created by renowned artists, Ulrich Steiner and Albin Polasek.

Taking 5 years to build, they never took out a mortgage and bills were paid immediately. Turnblad, his wife and daughter, lived in the mansion from 1908 to 1929.Around 1910, they had two servants––a married couple––living in the carriage house on the property.Though they had this beautiful mansion, they also owned an apartment, which may be where they largely lived especially after 1915.

In December of 1929, they donated it toAmerican Institute for Swedish Art, Literature and Science – now known as the American Swedish Institute. Turnblad was eager to transform it into a Swedish-American institute. He is quoted saying:“Many persons may have wondered what a small family like ours, a family which had not great social ambitions, wanted with so big a house. Perhaps they can guess now.”

Its sophisticated beauty is even more impeccable in real life! We were honored to have the opportunity to shoot in the Turnblad Mansion’s most elegant room, the Salon.

We’re so grateful for our #ForeverBrideTribe who made this shoot possible. Alexandra Oleen Photography worked her magic on the stunning photos, SoCoJo Makeup Artistry beautified our modelSitanja Keakinni, Couture Fleurflourished in creating a stunning bouquet, and Annika Bridal dressed Sitanja in an elegant lace-sleeved gown. Talk about a dream team!!

BTS fact: These florals are fake! They look too incredibly real, don’t they? Lesley of Couture Fleur blows us away every time (real or fake).

STUNNING! We loved the light, airy feel this room presented.

It’s true-–you can even get married here! Head over to the American Swedish Institute‘s profile for details + their exclusive Forever Bride deal.

**General historical information is from the American Swedish Institute’s website and Wikipedia.